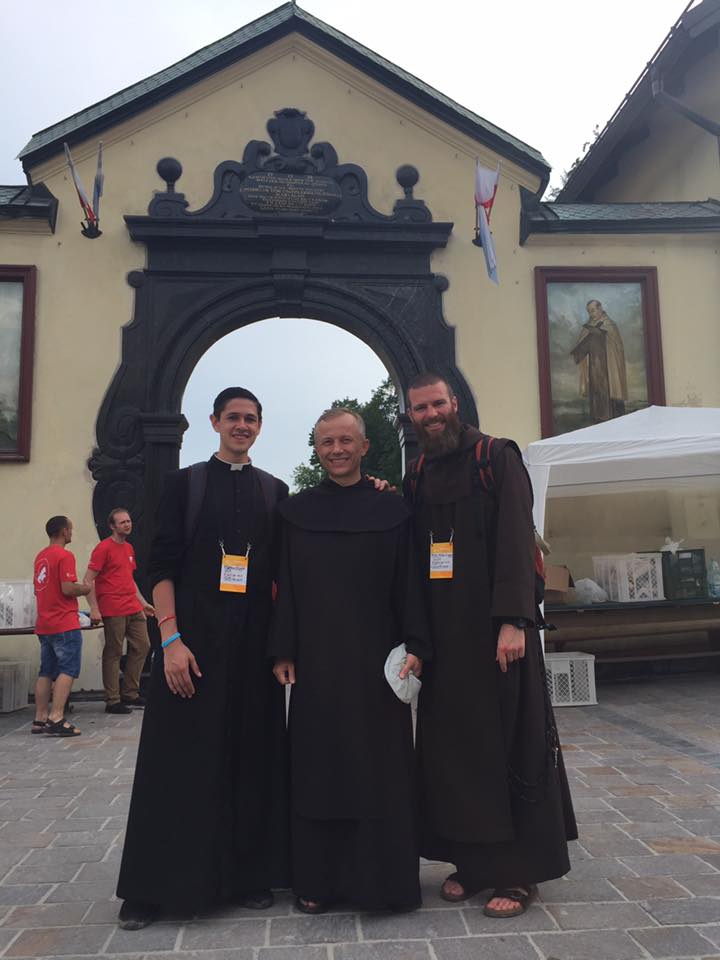 They [religious] live more purely, they fall more rarely, they rise more speedily, they are aided more powerfully, they live more peacefully, they die more securely, and they are rewarded more abundantly.”

It would be fair—if a little ironic—to say that my discernment of my vocation with the Carmelites really began on that retreat with the Dominicans. The quote I had seen on the icon of St. Teresa, “God denies himself to no one who perseveres,” was encouraging to me as I drew to the end of my time with them, growing more certain by the minute that God was not calling me to his Order of Preachers! So many of the young Dominican brothers told me that they came to St. Albert’s and were sure they had just found “their people.” I was equally sure that I had not!

Nevertheless, I found myself beginning to think, “maybe the Carmelites are ‘my people’.” I remembered the great fraternity and personal holiness I saw among my young Carmelite brothers at Mt. Angel and, of course, the great example of Fr. Thomas Koller. (“I’ve never met a Carmelite I didn’t like,” I remember telling someone around that time.)

Carmel loomed large in my prayer through the remainder of my second year at Mt. Angel. After spending Holy Week at my home parish in Roseburg, I went on a personal discernment retreat for several days at the Carmelite House of Studies. “I do not want to be too hasty about drawing conclusions,” I wrote in my journal on the very first day of that retreat, “but I will just say this: what I so conspicuously did not feel with the Dominicans, I do feel here.” Almost immediately, I felt a strong sense of being at home with the Carmelites, of brotherhood, mutual support, peace, joy, warmth, good humor, and comfortable silence, like “the whole house is suffused with the quiet of the chapel after prayer” (as I wrote in the same entry).

Over the rest of the semester, I spent a lot of time in conversation with Fr. Thomas, as well as those Carmelite brothers who were studying with me in the seminary, about the Order and my ongoing discernment. One piece of advice Fr. Thomas gave me which I particularly took to heart was an exhortation to “holy boldness”—that we can never lose by pursuing God’s will in the honesty and simplicity of our heart, whereas there are a thousand ways to go wrong by holding back out of a sense of fear, or duty, or any other motivation at all.

Fear and duty were my own primary reasons for holding back at that point: fear of being too hasty, or jumping in, only to find it was not my vocation and have “wasted my time,” or of not being good enough or strong enough to handle the consecrated life; duty to my diocese, my archbishop, and my family, all of which were extremely hard to imagine “turning my back on.” My initial zeal, which grew very quickly to an almost overpowering desire for Carmel (I wrote during that first retreat at the House of Studies that “I want to be a Carmelite so badly that my heart aches a little to think of it!”), was diminished and tempered by my fears and doubts in the months to come.

As I committed myself to prayer and discernment, I grew apace in awareness of the many attachments I had which were keeping me from pursuing God in true simplicity of heart, and out of that awareness, I began to experience again the graces of growing detachment, as I had in the months leading up to my entering the seminary. I had been treating it like a choice between two good things, Carmelite or diocesan, rather than listening humbly in silence for God’s holy will, which, after all, is the only good thing! As God began to sever the attachments of my heart, so too did many of my fears about going into Carmel diminish.

Over the summer, I spent a lot of time at the House of Studies, and made a few more discernment visits to other Carmelite foundations on the West Coast. I also had the great privilege of going to Poland for World Youth Day as part of our archdiocesan pilgrimage, and ended up rooming with, of all people, a Carmelite brother who I knew well from the seminary—we had our mental prayer together every morning in the silence and solitude of the hotel courtyard, and visited a Carmelite monastery together, where we met the Superior General of the Order!

Finally, toward the end of that summer, I made a week-long discernment visit to Mt. St. Joseph Monastery in San Jose. Sitting in the library there, armed with a pen and highlighter, I read over every little thing I had written since beginning my discernment with the Carmelites in earnest: 70+ pages of journal entries, poems, prayers, scribbled excerpts from the psalms and the scriptures. I was trying to trace the overarching movement of the Spirit throughout my whole process of discernment. What were my motivations? Were they pure? How had God really been leading me? Had I mistaken his signs—misread them through the distorting lens of my own desires, or been overly hasty to do what I wanted instead of “listening to what the Lord asks, and then doing it,” as St. John of the Cross so wisely counsels?

“I don’t know what I hope to gain from it, exactly,” I wrote in regard to this high-stakes spiritual research project. “Greater certainty? Reassurance that I’ve done my ‘due diligence,’ tested the spirits adequately and found them good? One thing I was surprised to (re)discover were the many parallels between my discernment now and my discernment 8 months ago at St. Albert’s. Much of what I am feeling now—an emotional cocktail of attraction, desire, hesitation, uncertainty, doubt, fear, longing, and guilt for feeling anything but an unbridled and uninhibited desire that His will be done!—I also felt then. Much of what I am afraid of now—’losing time’ or somehow wasting time by entering religious life; giving up freedoms and familiar comforts; losing friends; being less available or out of touch with my mom and my family—I also was afraid of then. And much of what attracts me now—beautiful liturgy, brotherhood, common life, community prayer, greater flexibility and freedom in opportunities and places to minister, knowing I will be taken care of when I am old—also attracted me then, even if I didn’t see it lived out in the most attractive way in the Dominican life. Yet I left the Dominican retreat knowing intuitively (though I didn’t ‘decide’ out loud til later) that I was not called there—but 2 days into this retreat and I ‘know’, again, intuitively, that I’m going to be a Carmelite.”

That was the core of it: an intuition, fed by so many hours drinking deeply from the living waters of prayer (the real work of discernment), and confirmed by many consolations, both ordinary and extraordinary, that this was God’s will. Finally, at the end of this last discernment retreat, I turned to the Lord and said, “Well, Jesus, you certainly seem to be calling—calling without ceasing! I trust that you have led me so far. I know I have done good discernment; I have tested the spirits, and in all of this you have never stopped leading me onward and have given me no sign to turn back. My only reasons for holding back now are my own lingering doubts and fears, anxieties, attachments, and ambitions … But I love you, Lord; you are my strength! I am going to continue along this way unless you show me otherwise, and may your holy will be done.”

The day after I came back to Portland, I went nervously to the chancery, where I had been working just a few weeks before as part of my summer assignment, to meet with Archbishop Sample. I had set up the meeting before leaving on retreat, with the intention of discussing my ongoing discernment. I knew even before I had left for San Jose that my time there would have to be decisive: by the end of the retreat, I would either be taking the next step in my discernment with the Carmelites—beginning my application to join the Order—or I would be closing that chapter of my discernment definitively to continue in formation with the Archdiocese of Portland.

At the forefront of my mind (and, I suspect, the archbishop’s too) was a story about St. John Paul II which I heard for the first time while we were traveling in Poland together that summer. Young Karol Wojtyła also wanted to join the Carmelites while he was a seminarian for the Archdiocese of Kraków, but when he went to his archbishop and told him about his discernment, he received a curt reply: “First you must finish what you have started!”

Archbishop Sample, a secular Carmelite himself, confessed that, although in one sense this was the worst news a bishop could hear, it was, on the other hand, the best news anyone could hear. God continues to call us all to Himself, he said; he would never want to do anything to stand in the way of my following God’s will for my life. So although he was sad to see me go, and indeed hoped the Lord would one day call me back to the Archdiocese of Portland, he trusted in my discernment and gave me his blessing, wishing me “nothing but the greatest joy” in continuing to discover and live God’s vocation for me to the fullest.

I returned to Mt. Angel that fall feeling reinvigorated, excited to return to the familiar rhythm of classes and community life, but even more excited to start taking concrete steps along this new path and see how far the Lord would take me. By the end of September, I had submitted my written application and letters of recommendation, and at the end of October, I flew down to Los Angeles for two days to do (another!) psychological evaluation. Finally, on December 1, I got the phone call I had been waiting for: “We are very blessed and very grateful to accept you as a postulant in the Teresian Carmel.”

This is part 5 of QUO VADIS? – a series on my own discernment of the Lord’s call to priesthood. New updates will be posted weekly. Read part 6 here.

Go here to view all posts in the series.